The Wheel of Fortune

The Wheel of Fortune: Destiny and Fate

“Round and round it goes and where it stops nobody knows.” 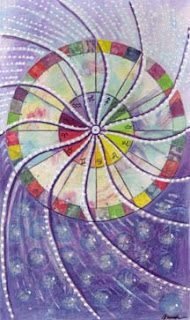 When we think about the symbolic meaning of The Wheel of Fortune card in the Tarot, the question comes up: Are events in our lives inevitable and providential subject to the randomly turning wheel of fate? With the passage of time, who or what determines your fate? You’ve probably asked, “Why am I here? What is my purpose in life? Why do bad things happen?” Why are some people more successful than others? We can have a deep discussion about the answers, but first let’s look at all sides of the question.

One’s fate is in the mind of the person. What happens next is based on the choices we make regarding our opportunities, possibilities, and life style changes. “For most of us, it’s easier to celebrate or bemoan our fate than it is to take responsibility for our choices.” [Gail Fairfield, “Choice-Centered Relating and Tarot,” Weiser, 2000, p.8.] It seems each new generation must learn certain inevitable lessons in living this life, so it’s important to recognize the forces that impel us forward or hinder our progress. An older person who has already experienced many of life’s tests and trials may see the same lessons repeated over and over again by each upcoming generation. This cyclic activity is comparable to earth’s seasonal changes that we experience as spring, summer, fall, and winter every year, but with new ramifications.


When you get The Wheel of Fortune in a reading there are two sides to consider. Maybe it’s paying attention to a golden opportunity knocking at your door. Or it could mean the opposite effect and you go down the wrong path. Depending on your choices, you may not recognize your good fortune and so it slips away. An early painting of The Wheel of Fortune is seen in the manuscript Carmina Burana (1230 AD). Four people are portrayed ascending and descending on the rim of a wheel while the goddess Fortuna unrolls two empty scrolls in the middle. Fortuna is also depicted turning a crank in some illustrations. In a positive mode, one figure moves upward on the wheel toward success while, in a negative sense, a forlorn figure falls off to his/her doom. Someone on the bottom is ground under as the wheel rolls over him. However, there is a figure at the top seated on a throne wearing a crown.


In another context, Matthew Fox discusses the spiritual meaning of Hildegard of Bingen’s painting of a “Cosmic Wheel” (Universal Man) in writing about her work. [“Illuminations of Hildegard of Bingen,” Bear & Company, 2002]. In the twelfth century, she painted a fiery wheel with a divine personage in the center, and animals, fish, clouds, rain, stars, around the inner ring. The elements and planets are included on the outer rim. Fox quotes her as saying, “Out of the original source of the true Love in whose knowledge the Cosmic Wheel rests, there shines forth an exceedingly precise order over all things and, this order which preserves and nourishes everything comes to light in a way that is ever new.”


The Wheel of Fortune in “Tarot of Cosmic Consciousness” depicts twelve signs of the astrological zodiac divided by propeller-like spokes in a 360° circle. Light rays shine down from above and bubbly mysterious waters lurk below. The symbols of the zodiac appear on a color wheel in the center with 36 colored decans around the outer rim. In modern astrology, the interpretation of constellations and planets can be seen in relation to natural rhythmic cycles documented by sensitive equipment as recurring patterns in the human body. Science has revealed the electrical rhythms of brain and glandular cycles, which may be the result of electromagnetic vibrations and invisible radiation. What is the driving force behind these cycles? This may better explain the meaning of planetary associations with the constellations of earth’s orbit, which were originally viewed by the ancients as the divine behavior of the gods. [Refer to “The Compleat Astrologer” by Derek and Julia Parker, Bantam Books, London, 1975].


If the Wheel of Fortune comes up in a reading, be prepared for unforeseen changes in your life and allow yourself to do something completely different. Chance encounters, surprises, and the unexpected may occur now and wise choices are especially important, because what you choose to do could change the course of your life for better or worse.
Posted by Barbara Bruch at 2:30 PM