The Lovers: Merging or Separating 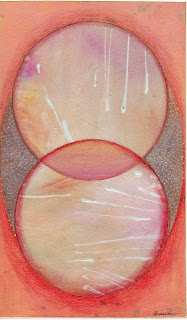 Let’s start where all relationships begin: “I love you” or “I hate you.” I was sitting at my desk at work one day and suddenly a little boy, about three years old that I had never seen before, appeared in the doorway. I looked at him and he looked at me and he said, “I don’t like you.” I work in a home office and some people were guests upstairs that I didn’t know about. (There was a lot of tittering in the background from another worker.) Yes, that’s how fast it happens. It was the beginning of an estranged relationship.
Why is “The Lovers” card in Tarot of Cosmic Consciousness painted as two overlapping circles? It’s here we take another step into Sacred Geometry. The one is dividing into two—or—is it two merging into one? For some lovers, to merge is an attempt to return to an original sense of spiritual oneness. On the other hand, for others, it’s something to escape from. Is the glass half empty or is the glass half full?
In the biblical story of creation, Adam and Eve (as the first couple) got into trouble right away. What went wrong? In “The Lovers” card of older Tarot decks such as “The Builders of the Adytum,” or the Waite, Colman Smith deck, Adam and Eve, archetypal figures from Genesis, are depicted standing in front of 2 trees. It’s explained that behind Eve is the “Tree of Knowledge of Good and Evil,” and behind Adam is the “Tree of Life.” In the story, because they disobeyed and ate of the “Tree of Knowledge of Good and Evil,” they experienced duality and the separation of opposites. Just try discussing this story for an invigorating evening sometime (Eve-ning, pun intended). Did Eve recognize that evil, in the form of a talking serpent, was trying to entice her, but then she went ahead and fell for it? Was Adam just being naive and opportunistic for falling for it too? (Is this the meaning of the metaphor of “The Fall”?)
Michael Schneider says in his book, “Beginners Guide to Constructing the Universe” (HarperCollins 1995): “Polarized thinking encourages our sense of separation and deflects our vision from the world’s—and our own—inherent unity.” I ask, how do we function in a state of togetherness? We connect with each other through mutual agreement, negotiation, cooperation and compromise. Most everyone wants to have an intimate relationship. Usually we are relating to another person or group of persons in some fashion. Gail Fairfield says in her book “Choice Centered Relating and the Tarot,” (Samuel Weiser, 2000) “Once a commitment has been made and is well defined, the dance of intimacy (or closeness) and autonomy (or separateness) begins.” 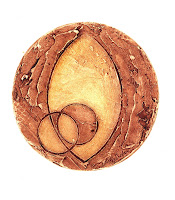 The two interlocking circles look like a division but, can also be a reflection. In a metaphysical context, it could mean a spiritual reflection of the infinite One. The circle repeats itself. A new shape is formed—the “Vesica Piscis,”—which is an oval mandorla with pointed ends. This has long been acknowledged as a female symbol of the womb where living beings are formed in a mysterious process of exponential cellular growth. 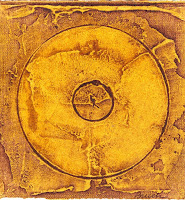 In Sacred Geometry, the intersecting circles represent the beginning of two-ness. While drawing the “Vesica Piscis” we begin a process of thinking about how things come into being. To experience this for yourself, start with a pencil point on paper and place a compass on that while contemplating cosmic concepts such as the One Being. Next, draw the circumference of the circle—and think of the origin of the universe, the planets, stars, and especially your own beginning. Cell division has begun. 1 becomes 2, 2 becomes 4, 4 becomes 8, and so on. This isn’t a “chicken or the egg” situation. “The Lovers” represent the profound secrets behind the beginning and multiplication of life.
Posted by Barbara Bruch at 12:25 PM 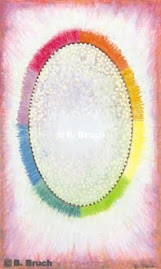